What You Can Learn from Coca-Cola’s Marketing Strategy

Representing one of the most well-known brands in the world, well-loved from the 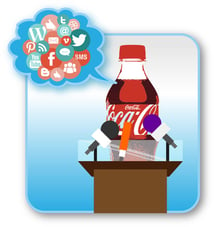 west coast of the US all the way to Japan and Africa, Coca-Cola has not gotten where it is by being idle.

Other than producing copious amounts of the delicious beverage itself, for over 125 years, the execs at Coca-Cola have also been doing a fantastic job of selling the idea of enjoying a refreshing beverage on a hot day and sharing the feeling with your close ones.

They’ve even managed to make a summertime refreshment popular during the winter. We all know the brilliant commercials with Coca-Cola trucks rolling around suburbs and spreading joy together with Santa Claus.

Tough to beat a brand that’s got Santa on its side.

Anyway, for a startup or a business looking to improve its chances of success in an already-crowded global market, there’s plenty to learn from the legendary status and success levels Coca-Cola’s enjoyed over the hundred-plus years it’s been in business.

In this article, we’re going to talk about Coca-Cola’s elaborate marketing strategies and what you, as a business owner, can learn from them so that you can further your cause.

Without further ado, here’s the deal.

What You Can Learn from Coca-Cola’s Marketing Strategy

At Coca-Cola, they’ve managed to foster a carefully-built image over the years that’s family-friendly but also fun enough to avoid boring everyone and alienating young and energetic people.

To do this, you must adopt a multifaceted marketing approach that targets a large audience with detailed and well-researched campaigns and commercials.

The folks at Coca-Cola have been doing a great job of this, as there is scarcely a commercial that ever came out of this company’s lab that could be described as ‘boring’ or ‘forgettable.’

Of course, it’s not all about just commercials.

Striking deals with celebrities, acquiring valuable sponsorships, and concocting an impressive portfolio of beverages and success stories all account for the absolutely massive success that this company has had on the global market.

In the passages below, we’ll detail each marketing strategy that’s worked for this business so far.

In a recent Coca-Cola commercial, a guy enters a subway train, plays a video on his tablet, and starts laughing out loud.

The guy’s laugh is so contagious that soon other passengers start laughing with him, too, even though they have no idea what’s so funny.

Soon, the entire section of the train is laughing out loud, which is when a team of Coca-Cola representatives appear and start giving everyone a Coca-Cola pamphlet and a can of the beverage.

This represents the perfect example of what Coca-Cola's branding ideology is all about.

If you can get your customers to mentally connect your product with laughter and happiness, they will be more likely to buy it, as consuming it brings back positive feelings and memories.

In general, Coca-Cola’s commercials always tend to have an emotional bent to them, typically with the beverage playing the central role and somehow bringing laughter and joy to whomever it is in the commercial.

Local customs and traditions of the region the commercial is designed for are also used to a great extent. Everyone knows Coca-Cola's wintertime commercials depicting Santa Claus, Coca-Cola trucks, and happy families brought together to enjoy it all.

If you can take a market you’re interested in approaching and selling to and dissect it, you can gain valuable insights from seeing what this piece of the population is ‘made out of.’

While everyone likes the taste of Coca-Cola, there are always some parts of the market that may not necessarily buy it.

Whether this is because they prefer another brand, such as Pepsi, or they have some other reason for avoiding buying the beverage, Coca-Cola wasn’t always in the position to sell a vast amount of product to everyone.

It was only recently, for example, that Coca-Cola encountered a large market of stubborn Millennials who justifiably avoided this brand over health concerns.

It’s never been a secret that Coca-Cola is a beverage containing quite a lot of sugar. Now, a big part of the market of Millennials did not like this, mostly thanks to new medical studies suggesting the detrimental effects excessive sugar consumption has on the body.

The execs at Coca-Cola recognized this problem and then went on to approach this target audience with a different product - Diet Coke. (Or, Cola Zero, Cola Zero Lemon, Cola Zero with Vanilla, you name it!)

Corporate greed is one of the surest ways to torpedo an otherwise well-functioning budding business venture.

Even if your product or service is exceptionally good and in demand, pricing yourself out of your target audience’s pockets is a real prospect if you’re not careful.

When it comes to Coca-Cola’s approach to pricing its products, they have one general idea: they go with whatever sticks to conquer a new market.

Start selling at a low cost and ramp up the number of sales and the pool of faithful customers appreciative of your brand.

Once the Coca-Cola brand has become a household staple, you can start slowly increasing the price of the product.

The price increase is never sudden or steep, though.

What’s more, Coca-Cola makes sure never to abruptly increase the prices of their beverages before they run a marketing campaign that offers something new - as a justification for the price increase.

This way, Coca-Cola earns the trust of its target audience simply because it always cares to explain why it is doing what it is doing and not keep them in the dark with regard to its pricing practices.

An ‘catchy tune’ never fails to capture the attention of a target audience.

Even if the melody is not likable enough to be hummable or memorable enough to immediately remind you of the product in question when you hear it - it’s done the job it was created for.

Coca-Cola has been one of the companies that has taken the idea behind commercial jingles to a whole new level.

The idea behind Coca-Cola’s jingles was always to make them as simple and as uplifting as possible.

A complex melody can be beautiful, but it can also alienate the folks who are not that into classical or overly complex music in general.

Since the idea behind Coca-Cola is that it’s a deliciously refreshing beverage, the melodies accompanying the commercials for this drink need to reflect that. A Coca-Cola jingle is, therefore, always simple and merry, and aims to make the person who hears it feel better.

Paying for a TV commercial is a great way to market your brand and increase your sales.

But what about paying for a TV commercial that runs in that half a minute during a Super Bowl break?

Major sporting events such as the Olympic Games, entertainment events, charity events, and other major televised happenings represent a goldmine of potential customers.

This is not just merely about visibility, either.

Any money spent on an event of a certain character will mean that the company doing it considers itself a part of that world in a way.

For example, if you see a Coca-Cola commercial at a music festival, that means that people who drink Coca-Cola are into music. (That’s what the creators of the marketing campaign have in mind, that is.)

Also, somewhat counterintuitively, Coca-Cola has been the sponsor of many sporting events and competitions. As a result, many people see Coca-Cola as a go-to brand for family gatherings where you get to sit down, have some popcorn, don a shawl with the colors of the team you’re supporting, and watch a game of football or two.

Building up your brand takes some initial creativity and then a lot of work to keep that image going no matter the current trends and market requirements.

They say that some of the best brand logos in the world can be recognized as a black-and-white representation or a shadow on the wall - simply because their outline shape is so recognizable.

This certainly applies to Coca-Cola’s iconic bottle, which has not seen any significant changes in over a hundred years. Add to that the easily-recognizable letters on the bottle, and you have the bottle and a beautiful piece of calligraphic handwriting that’s managed to withstand the tooth of one entire century. (And counting.)

Making a memorable brand is not easy, as it requires a delicate special mixture of aesthetic appeal, information, trustworthiness, and the innate quality of the product itself.

For this reason, many startup businesses out there seek the help of public relations firms Miami or elsewhere globally, as getting some help in building and maintaining a positive public image in an effort to further your brand can be achieved more easily with some professional help.

All in all, as one of the leading soda pop-making companies in the world, Coca-Cola has certainly not come where it is today by making bad choices.

The tremendous effort that goes into the marketing campaigns of this global giant represents a complex mixture of brand-building, emotive marketing, clever pricing, and closing lucrative and strategic sponsorship deals.

Being able to navigate the often-turbulent waters of global markets means having to tread lightly and make bold decisions that propel your business into a commercial success story.

Coca-Cola represents one of those brands that managed to find their taste, voice, and image early on and capitalize on their fantastic marketing strategies over their 100-plus-year-old existence.

The bottom line is, and this also represents a recipe for success for other companies: be true to your original purpose and then find a way to make your brand likable, relatable, and fun.

Branding and package design are critical to success like Coca Cola has achieved. Short-cutting is never in their strategy.

What Coca-Cola Can Tell us About Effective Branding