How To Create A Brand Name 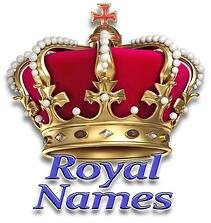 With the birth of England's His Royal Highness Prince Archie on May 6th, 2019, royal baby names are back in the news. If you are like me, your first thought is what's the big deal?

Proud parents Duchess Kate and Prince William in July 2013 had help from both the family tree and from history as they named their son, since the tiny prince probably got his first name "George" from his great-grandmother Queen Elizabeth's father George. What's in this most auspicious of royal baby names, though? And why should that matter to your new product or service?

Simple. This latest nod to royal baby names puts the focus on what really goes into a good name:

Prince Harry and Duchess Meghan went against tradition by naming their son Archie. This is unlike ANY previous royal baby. His cousin, Prince George, has a family name that surely was carefully chosen by his parents and it fit's him. Take a look at Prince William; could you see him being called "George" or "Louis" or "Charles"? Not likely, right? He's William and it fits.

The same goes for your product or service. Choose a name that fits its purpose and your company image. Your product or service will come to be identified by that name, naturally and easily. Choose a name that is memorable, identifies it use or purpose. You wouldn't name a girl George. And you wouldn't name a hammer "Soft Impact". You have to weight marketing strategy and competitive marketplace.

Prince George's name has a lot of history to it. While his first name probably comes from his great-great grandfather, King George VI, "Alexander" may have been a favorite of the Middleton family, thus an acknowledgment of his mother Kate's family. The last of his three names, "Louis," is both one of his father William's names and was probably also given to him as  a tribute to his grandfather Prince Charles's beloved late great-uncle Louis Mountbatten.

Prince Archie will likely be a trend-setter, half-American and the first known royal with  a biracial parent. He's not completely breaking tradition - his full name is Archie Harrison Mountbatten-Windsor.

It's got some history to it

For product names it's worthwhile to review the industry your product is created for. People have become familiar with style of names for services. Going against tradition  can be a benefit or doom it to failure. You need to consider consumer awareness of the category. We all know what to expect when a "Sale" is announced. There are a set of words and phrases that need no explanation because they have history. Your new product has to take market share away from an established brand which demands that it is anchored to a strategic decision. It can be the one decision that makes or breaks your product launch. That strategic decision must direct all the branding efforts so that the brand name becomes invariably tied to the strategy.

Royal baby names aside, you can take some pointers from the history in Prince George's name by making sure your own product or service name similarly reflects your company's reputation and history. Incorporate your company's parent name into the new name if you can. It should be a strong, solid name that denotes history and quality; when customers say the name of your product or service, they'll not only be cementing the name of your company in their own minds (a great form of advertisement), but they'll also be associating that name with your company's history and reputation of quality.

Historically, royal baby names were usually comprised of four names rather than three; grandfather Prince Charles' full name, for example, is Charles Philip Arthur George, while father Prince William's full name is William Arthur Philip Louis. By choosing to give Prince George three names rather than four, his parents took a step into the 21st century with their participation in this relatively recent, modern trend of simplification. Prince Archie takes that move further away but retains one foot in tradition when his name ends in  Mountbatten-Windsor

It's relatively simple and modern

Similarly, when you choose the name for your own product or service, the acronym KISS applies: Keep It Simple, Silly. When you choose simple and modern, you make the name of your product or service easy to remember and therefore easier for customers to remember, too, when they buy. Look up availability of domain name,too. I prefer "dot"com ending over the others that have been added.

It will stand the test of time

"Prince George of Cambridge" fully embodies a royal baby name and as life goes on it will fit George the toddler, child, teen, and man. Will your product name stand the test of time. That is not as easy to predict. For that reason there are recognized brands that have adapted their monikers when they determined it was needed. Federal Express became FedEx. Coca-Cola adapted a product to be identified as "Coke", a formula that answered consumer interest in sugar free with the taste of Coca-Cola. The short name sets it apart while retaining family ties.

For a similar reason, including the parent company's brand name in the product or service's name anchors it to the established brand reputation. The name should be descriptive, memorable, and functional, something that will work as well tomorrow as it does today: Modern and descriptive, yet timeless too.

Are you ready to work on developing a brand name for a product, service or company? Download our free eTool to start the process.